Next it was time to tackle the cambelt. This is not really a hard job provided you think carefully about what you're doing and make sure you understand the process.

The first step was to rotate the crank so that all the factory timing marks were aligned and then mark the camshaft pulleys. The crank itself is aligned at top dead centre. 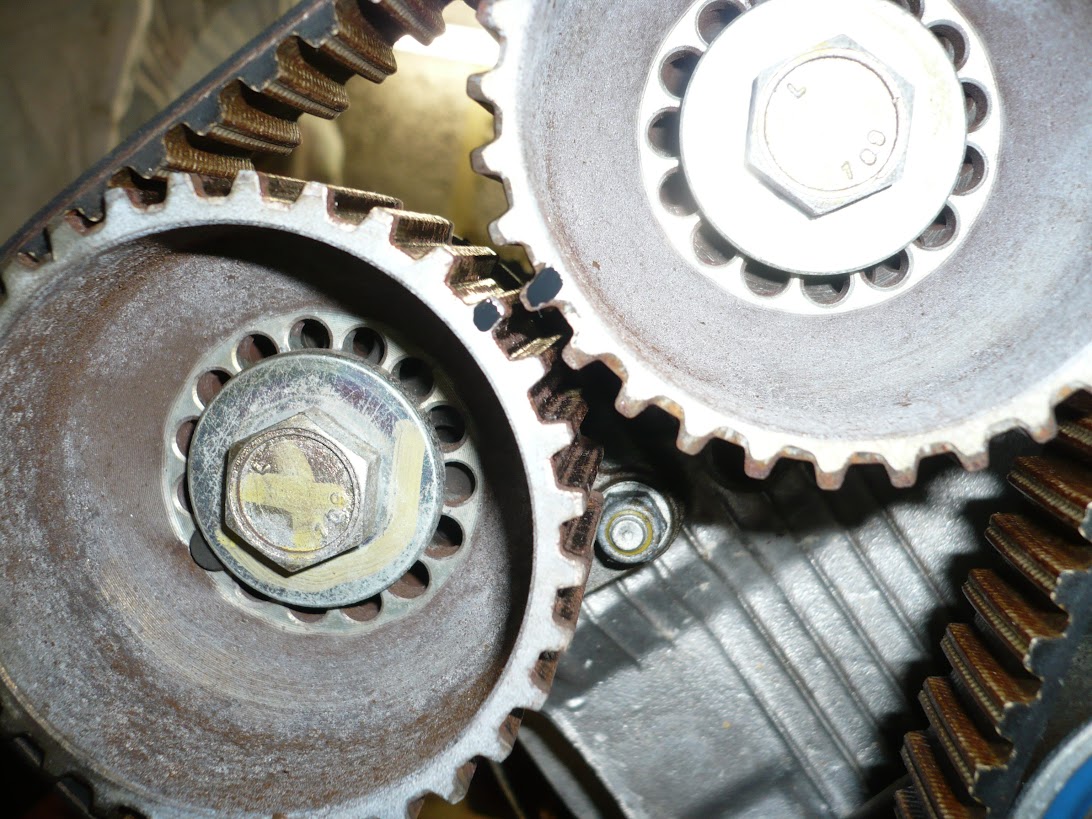 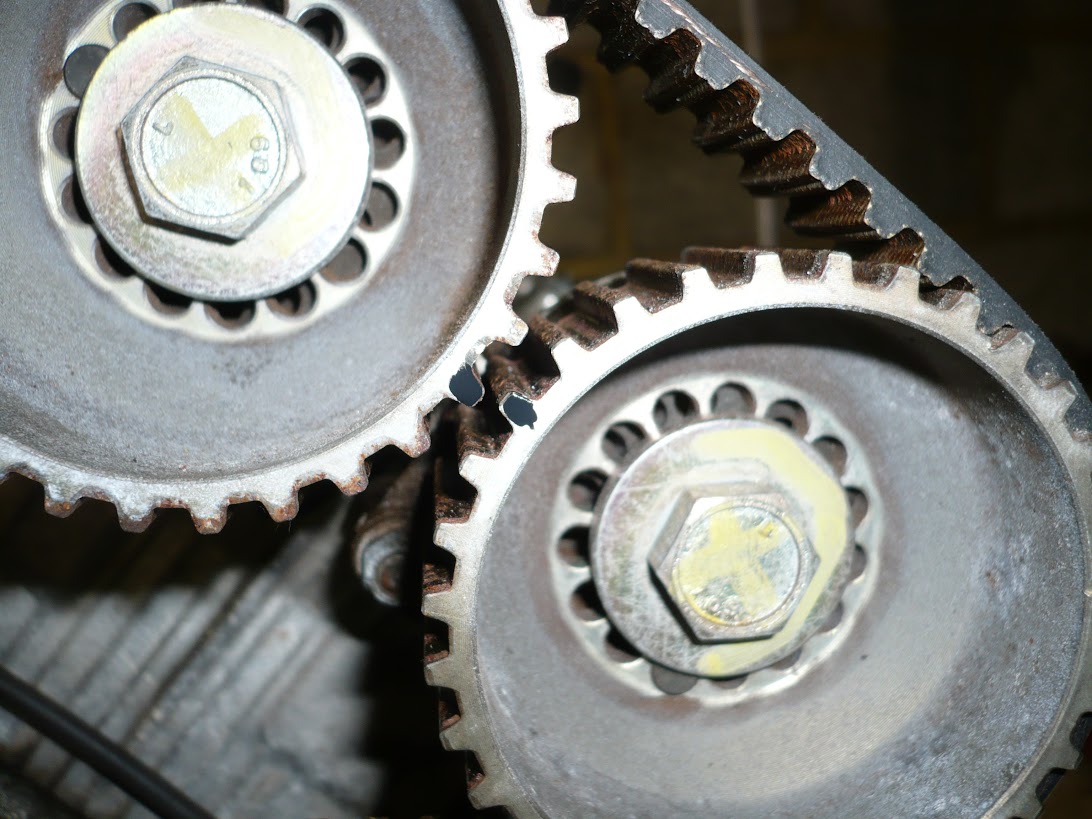 I counted the teeth on the belt between the camshaft pulleys so that I was able to replace the belt in a like for like position. Next, I loosened the tensioner on the left bank and removed the belt. The tensioner can stay mounted and swings out of the way to release the belt. I recall that I eventually found it easier to get the belt off by removing the tensioner bearing altogether though. 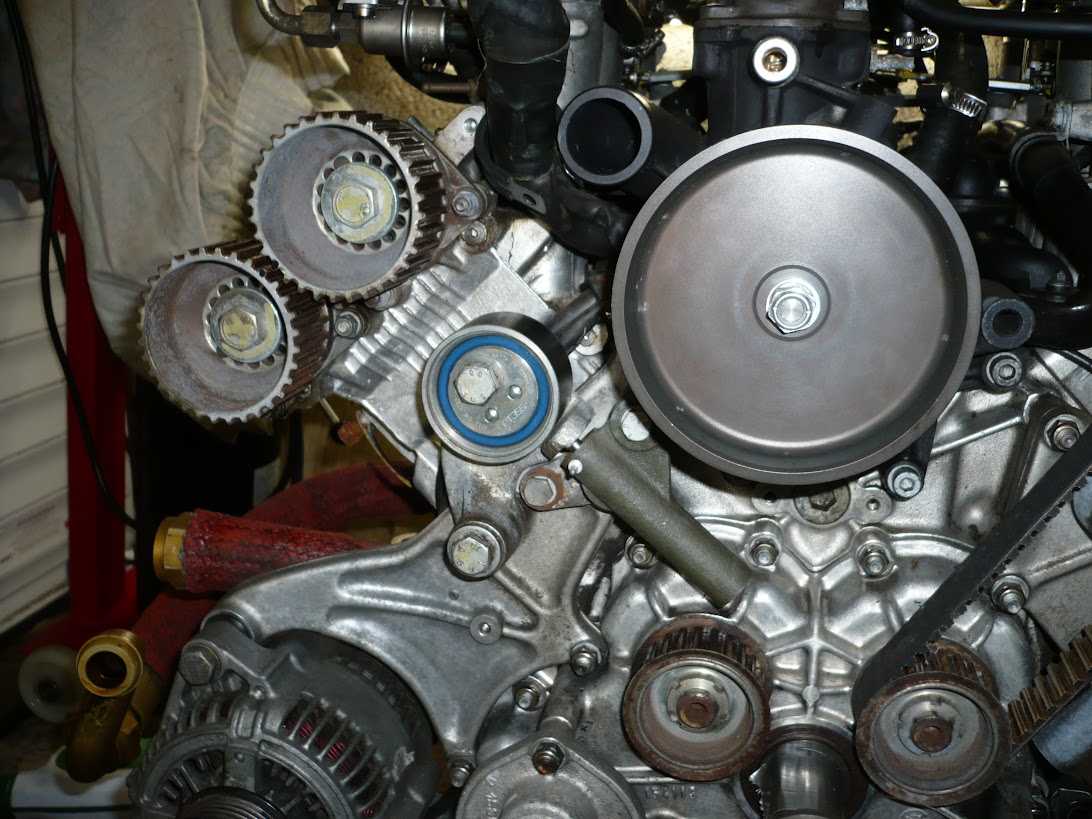 I then fitted the new belt, taking care to count the teeth on the belt again between the two camshaft pulleys so that it matched what was there before. For reinstallation I used a few spring loaded plastic clamps to keep the belt in place as it tends to move around a lot as you're trying to get it over all three of the sprockets. You can see one such clamp on the bottom sprocket holding the belt on. 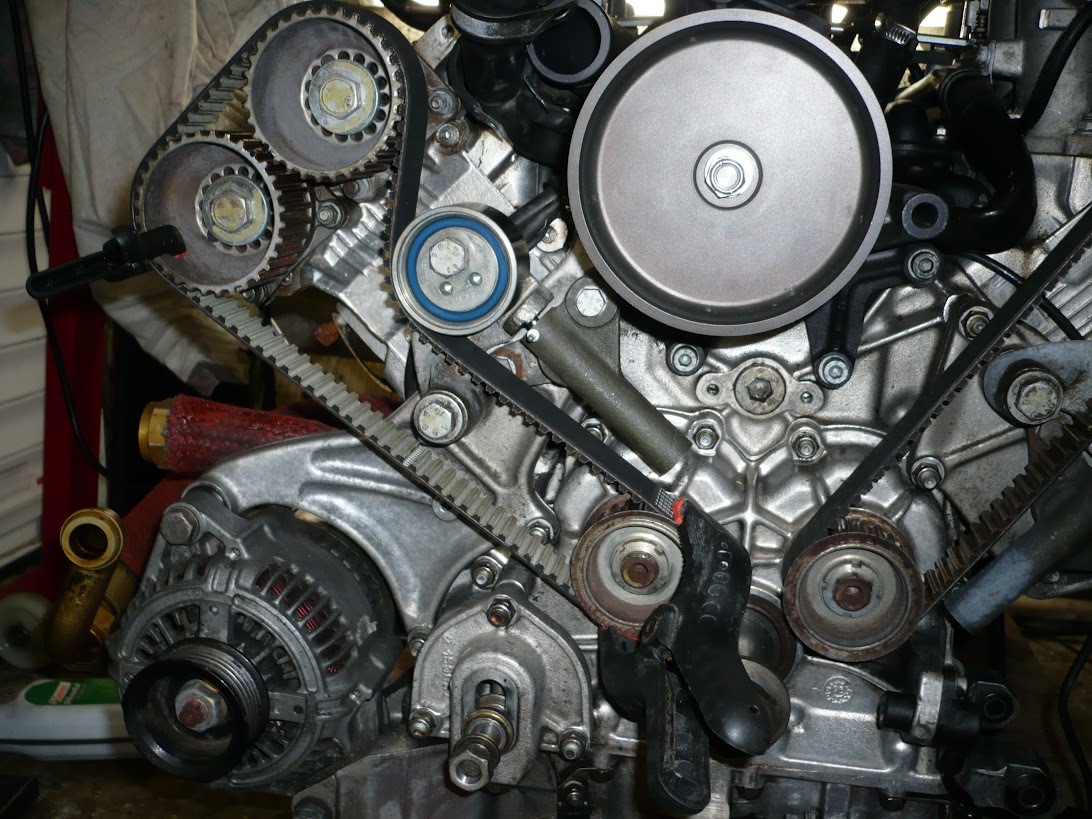 One thing that isn't very obvious, and the English instructions in the workshop manual are really poor here, is that the tensioner is made up of two parts. One is the bearing (with the blue centre) and the other is a "thermally self adjusting tightener", which is the cylindrical greenish looking object just below and to the right of the bearing. There are some instructions in the manual that describe how to set up the tension, but unfortunately the English translation isn't very clear.

The self adjusting tensiorer has a shaft that runs inside a cylinder. At the top of the shaft and the top of the cylinder is a hole. You need to compress the shaft inside the damper so that the two holes are aligned, then push a pin through them. This holds the shaft at a fixed point in the damper. With the shaft held still you can then alter the position of the tensioner bearing so that there is a gap between the end of the shaft and the base of the tensioner mount of about 2.5mm. 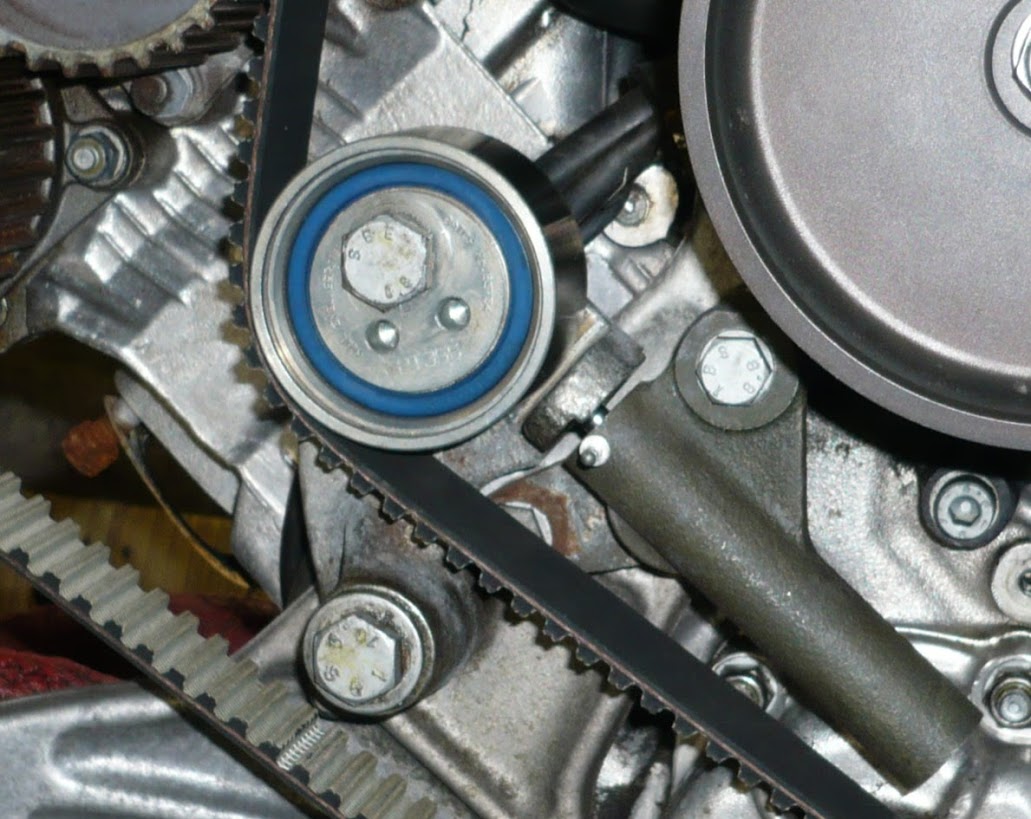 Once this is set you can remove the pin from the top of the damper.

The way this works, as I understand it, is that as things get hotter the clinder inside the damper extends outwards. This adds extra tension to the belt as things expand. I'm not entirely sure but I think there is also some sort of damping effect in play here too.

I found it quite hard to get the two holes aligned, not least because the shaft seemed to have rotated slightly, so I took it off and did it off the engine. I think that possibly you're supposed to force shaft back inside by rotating the bearing itself rather than do it separately but the effect is the same either way. I had to make a tool to rotate the bearing and it wasn't very strong, which is in part why I couldn't do it that way.

Right hand belts going back on. I've got three clamps holding the belt in place here so that the slack of the belt is all on the tensioner side. 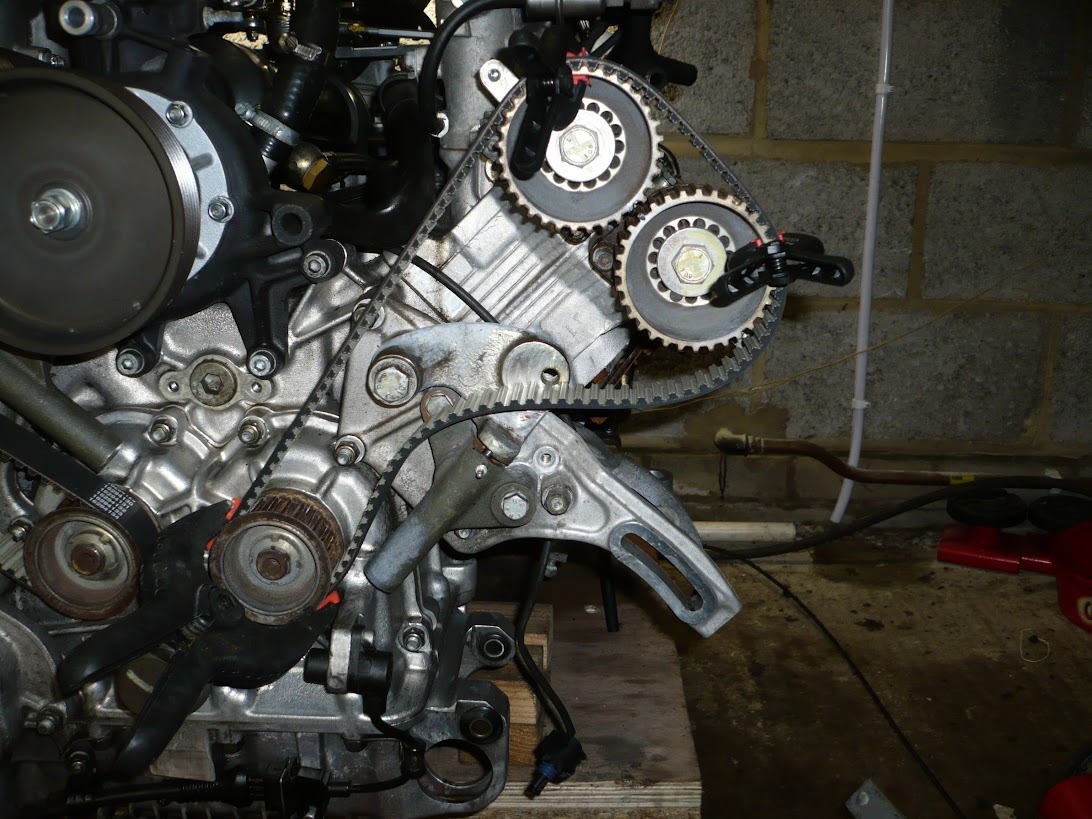 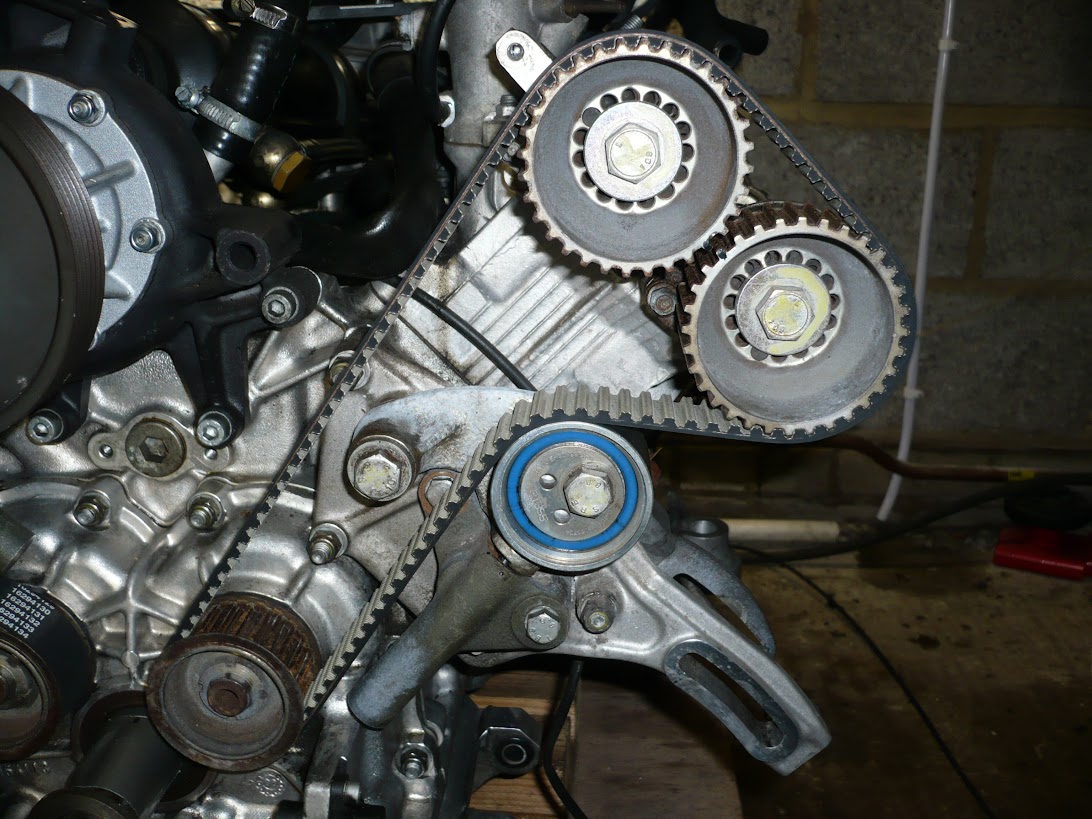 While I was in the vicinity I also reinstalled the idler pulley for the auxiliary belt. It's left loose though as it still needs to be adjusted when the belt goes on; 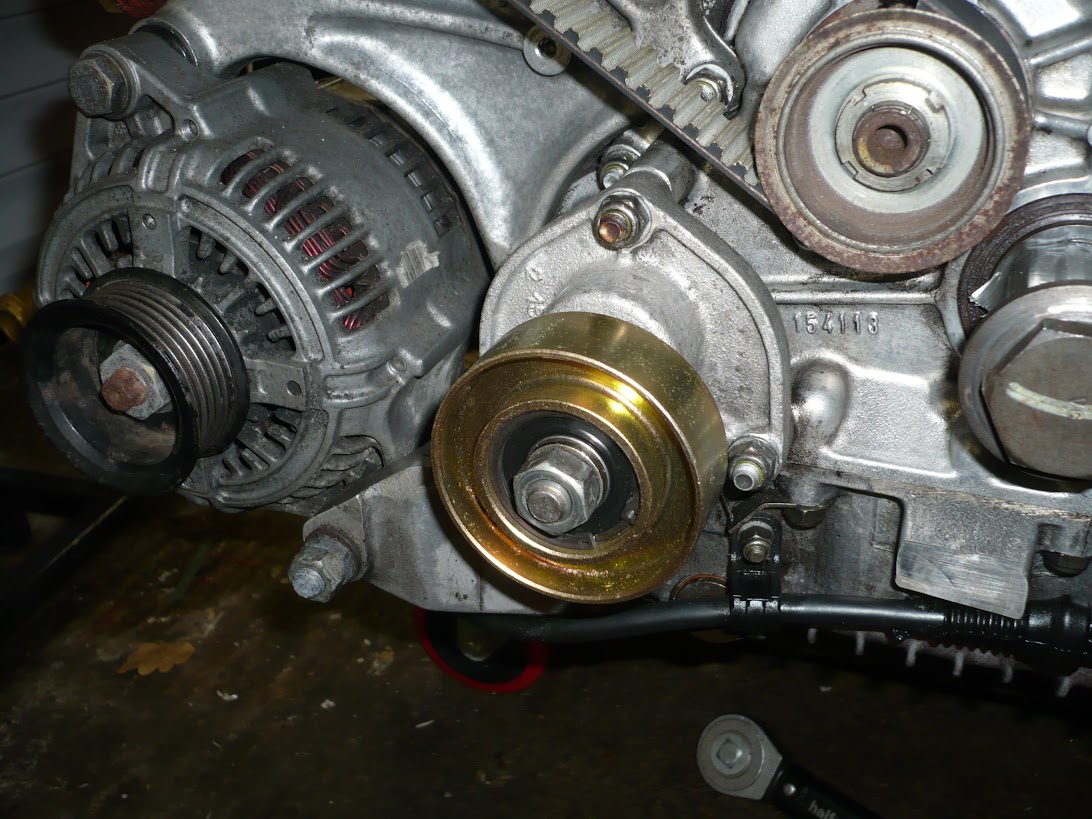 The final thing to do was to rotate the engine a few times and make sure all of the timing marks lined up - both the ones I put on the pulleys and the original factory timing marks. All checked out - move on to the next job, which is to reinstall the crankshaft pulley. I left this for the next article.